Designing a Kids’ house was an adventure for me; I imagine that many people would have a similar feeling as this in the beginning, especially women and girls. I didn’t have experience in designing or building a house before, not even a bird house. However, during the learning process, I was delighted to find out that if you like design and don’t easily give up, you will create something you’re proud of. Today I want to share some of the major mistakes I have made from day one of my project.

Before I start, I did a lot of research involving how to build a tiny house; I read articles and watched videos to give myself the knowledge I needed to feel confident enough to design the frame. However, I didn’t know the standard size of lumber for building a frame is 2” x 4” and instead I used ⅛” x ⅛” as my standard lumber size. The picture shown below is my first design for the kids’ house. I had to, of course, completely redo it. This was probably the biggest mistake I made during the design process.

You can see, from this picture, I made a few more mistakes. Firstly, the roof is a little bit weird. Secondly, the walls’ frames are not closed, which means that I didn’t build the frame piece by piece. Instead I had simply drawn lines, which was not right. Thirdly, there are doubled and even tripled layers for some parts of the frame, which is unnecessary.

After several revisions, I gained more knowledge about using SketchUp and drawing a better frame in less time. Now, I want to introduce my second version of design to you. After getting advice from my supervisor and colleagues, I built the frame piece by piece and then put them together. During this process, I learned that measurement plays a critical role in overall design. Even if you know the size of the house that you are going to build, the measurement for each piece of the frame is different. Under this situation, we need to do some math, but don’t worry! It won’t be as difficult as calculus or trigonometric functions; it’s just some addition and subtraction. For example, according to the second version above, the two walls facing us contain the measuring mistakes. I didn’t make the width of the lumber for one wall smaller, which caused one of them to cross the other. I managed to fix this problem by reducing one of the walls by 4” and they joined together perfectly. Thinking about the whole frame, measuring each piece individually and then creating these pieces to fit for the whole frame was what I had learned from version 2.

Now it is the time for us to fix the roof. From my experience, finding a reference figure is very important. My colleague provided me with some nice pictures of different kinds of roofs. Some of them are shown below.

I used these pictures as a reference to build my roof, which is also shown below. Measuring before creating is always the most important thing to build a frame. My steps were: 1) decide the height of roof 2) create the length and width of the roof according to the four walls.

After several revisions and hard work, I finished the frame design and we are now ready to build the real Kids’ house. My final design pictures are shown below:

The design process involves a lot of fun and several challenges. A girl, like me, who doesn’t have any experience in designing or building a house can create a beautiful frame; all of you can do it as well. Women and girls are attached to the stereotype of not having the technical skills to complete hands-on projects. I have finished my frame design and our team is ready start building. Do you want to join us? 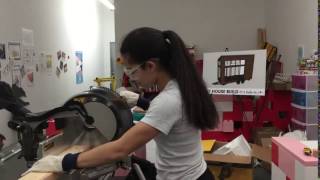 Women Who Build -Artists Who Own featured on NY1

Getting the Word Out at Socrates Park